It did not take long for the Mall of Scandinavia to gain ground in Stockholm.
On Thursday, it was appointed to Stockholm’s best shopping center by 1800 consumers.

Despite that this year’s edition of the annual Evimetrix survey “Stockholm’s favorite center” started two weeks after the premiere in November, Mall of Scandinavia was chosen to the best center – all categories, followed by
Täby Centrum and Nacka Forum.

A direct hit for Unibail-Rodamco, which owns all three. 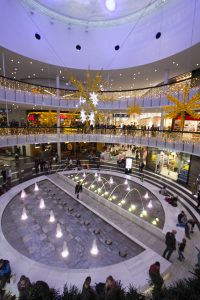 “The results of this year’s survey speaks for itself and we are extremely grateful for the amazing response our center have received, says Lars-Åke Tollemark, Managing Director Nordic, Unibail-Rodamco. As the awards are based on customer’s own reviews and experiences make them especially significant for us and we will work hard to not only maintain but also continue the development of our center,” says Lars-Åke Tollemark.

The survey was conducted among the general public in the Greater Stockholm and about 1 800 people have spoken out about 47 shopping centers.
Among the categories considered, Mall of Scandinavia is also the most congenial, have the best selection of restaurants and passes Täby in terms of retail offer.

“That the Mall of Scandinavia will win all five categories the Centre was nominated for in less than three months after opening, is a fantastic recognition and show that we really changed the norm for shopping centers,” says Lars-Åke Tollemark, Managing Director Nordic, Unibail-Rodamco .

Another happy player is Citycon where Liljeholmstorget Galleria was named best neighborhood center for the fourth year in a row and Högdalen Centre was named the year’s climber.

Stockholm’s most visited shopping center is the department store Åhléns.