Finnish department store chain Stockmann reports a larger-than-expected first quarter loss, due to weak demand in Finland and Russia and the weaker Russian rouble.
Lindex revenue was up in local currencies while Seppälä aims to close 20 russian stores.

Stockmann’s operating loss reached 43.9 million euros ($60.8 million) in January-March, compared with a forecast range of between 30 million and 38 million in a poll of analysts and an average estimate of 35 million.
The company also cut its full-year sales and profit outlook, saying it expected sales in euros to decrease and operating profit not to exceed the figure for 2013.

The retailer had previously expected slight sales growth in comparable exchange rates and a somewhat higher operating profit this year than in 2013.
”The Russian rouble was at its weakest-ever level against the euro during the first quarter of 2014. The Russian economy has stagnated and consumers’ purchasing power has declined. In Finland, the retail market also remained weak. These factors had a clearly negative impact on the Stockmann Group’s performance in the quarter”, says CEO, Hannu Penttilä.
Revenue and operating result in the Baltic countries were up.
In Finland, performance improved slightly towards the end of the quarter.
Similar development was seen in the Crazy Days campaign in April, which took place after the reporting period
Fashion chain Lindex’s revenue was up in local currencies and its operating result improved slightly.
Lindex will continue to expand with a net addition of over 20 stores in 2014, including franchising stores.
The Chinese company Suning unilaterally withdrew from the franchising agreement at the end of March 2014. Lindex will now investigate other opportunities to expand into the Chinese market, but Suning’s withdrawal will delay the fashion chain’s entry to the market, according to the Q1-report.

Seppälä’s result weakened further, despite store closures and other turnaround efforts.
Seppälä aims to close down over 20 unprofitable stores in Russia in 2014.

”Stockmann has started structural changes to improve the competitiveness in the weak market environment. The new operating model for our department stores in Finland is vital for ensuring competitive operations in the future”, says Hannu Penttilä.

Stockmann’s new distribution centre for its department stores and online store in Finland and the Baltic countries will be taken into use in 2016. The centre will be located in leased premises. Stockmann will make an investment of approximately EUR 28 million in the centre’s automation technology.
Stockmann als reports the Tampere department store will gain more retail space in the construction project, due for completion in the last quarter of 2014. Planning for the new Tapiola department store continues, but the timetable is dependent on Espoo City’s planning for the area.

The Group’s capital expenditure is estimated to be lower than depreciation, and to amount to approximately EUR 60 million in 2014.
Shares in the company opened down 2.3 percent. 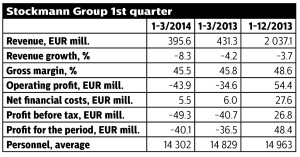