The fight about Sunday opening hours in Norway is taking comic proportions.

Customers are jumping over barrier tapes in temporary limited stores as Rema 1000 is making a statement, claiming its competitors have been breaking the law for 18 years regarding Sunday regulations.

Posters at the entrance urge customers to respect the barricades, but they are set up in a way that allows customers to get whatever products they want.

This is where the discussions about the Sunday trading regulations is now, following Rema 1000’s protests against especially Norgegruppen’s stores where Sunday open small stores give access to restricted spaces or use areas outside the store for product exposure or just temporarily cover some goods.

”We may have a few things to correct, but what Rema 1000 is doing is pure provocation,” says Bård Gultvedt, director at Norgesgruppen. 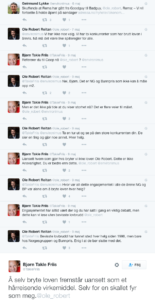 In Norway, only stores smaller than 100 square meters are allowed to be open seven days a week. Parliament opened for a a legislation change, but especially Rema 1000 was one of the opponents.

The discussion recently escalated sharply with police reviews, photographing each other stores and an intense Twitter-fight and culminated with the three major groupings was called in to the culture minister Friday.

”The law does not allow cordons nor light walls and more than 100 square meters in sales area,” said Helleland to Dagens Naeringsliv.

”For many years there has been a very broad interpretation, but I am clear that the law must be followed up. I expect that both Norgesgruppen and Rema as serious actors relate to the legislation.”

Rema 1000, who reported 120 competitor stores to the police in January claims they are not doing anything else than their competitors.

”We will refine stores to 100 square meters, and that’s what we’ve done. It is possible that the blocking bands have been moved. We do the same as competitors who use garbage bags and other stuff. As long as the competitors violates Norwegian law, we will continue with ratchet straps. We’re really just back to the start, where competitors have broken the law for 18 years without any ensuing consequences,” says  Jan Frode Johansen, director of Rema Franchise.