Kesko’s doing fine – outside Finland. Especially within building and home improvement. But at the home arena – the decline continues. Finnish sales in October 2014 was down 5,4 percent. Abroad: Up… Read more » 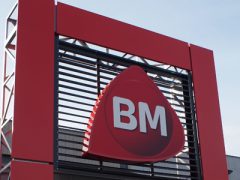 Byggmakker has now started to sell out stores to merchants. First agreement was signed last week, reports Byggeindustrien. ”We are now in final negotiations for a third sale, and have… Read more »

Byggmakker closes three of their four stores in Bergen. No local merchants wanted to pick up the fight with Coop.