Bergendahls Food will have a new CEO from 1 September. Peter Lund will only be President in the Bergendahls Group and Johan Johnsson, COO, and former vice President in logistics… Read more » 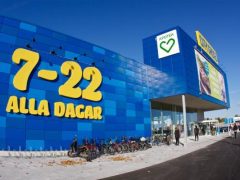 Bergendahls, the fifth largest food retailer in Sweden, making profits again. After three unique years of losses, the only since the company started in 1922, the Group reports a profit… Read more »

The battle about C4 Shopping in Kristianstad will continue, Land and Environment Court considers that Fastighetsägarna Syd are entitled to have their appeal heard by the County Board.

Citygross opened its 38th store on Wednesday and beat its previous opening records. At the same time, it was the start of a new retail park in Linköping.

Coop sold its Coop Forum in Falun to City Gross a few years ago, and has since then been almost invisible in the city with only a small supermarket. But now… Read more »

After Ica’s aquisition of Apotek Hjärtat – the partnership between City Gross and the pharmacy chain might end. According to Icanyheter, insiders says a situation with an Ica-owned store inside… Read more »

Sales rose by 5,9 percent within the Bergendahl Group during the second quarter (Like-for-like 3,4 percent).