Strædet, the 19,000 square meter project in Køge center is sold before construction work has started. Citycon acquires the property after TK Development’s completion. ”Our focus in Denmark remains on… Read more »

Giftcards are getting more popular for each Christmas. Citycon now launches a new shopping centre gift card for making payments in seven shopping centres and over 700 stores. The card… Read more » 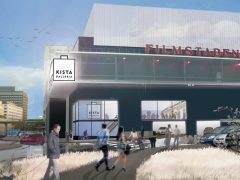 Kista Galleria opens a new entrance towards the residential areas in the north of Kista. The new entrance will increase accessibility for residents in the area – a region whose… Read more »

The suspicious object that got the police to close Liljeholm mall in Stockholm on Wednesday evening was a several-pound bomb. Thanks to a café owner who took care of a… Read more »

Citycon has signed a joint venture agreement with NCC Property Development for the (re)development and letting of Mölndals Galleria. The new centre at the second busiest traffic hub in the Gothenburg… Read more »

Citycon continues to target municipal services as a key to their shopping centers. Next week a new library opens at Kista, northwest of Stockholm City.

The Swedish seniors may not be as social as is often thought . Fewer than one in ten senior meet friends during their shopping trip. This is one of the… Read more »

Canada Pension Plan Investment Board acquired KIsta mall in a joint venture with Citycon. Now they buy a part of Citycon.