For the twelfth consecutive year PriceRunner has used consumer reviews to name the year’s best online merchants in Sweden. Several category winners have stayed on the top for many years. 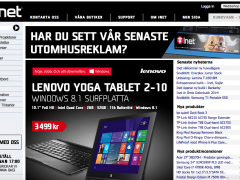 Soon, opens fast growing Inet its sixth store, but with a new majority owner. Creades buys 70 percent of the prized computer specialist. ”Most important to us is that Inet can… Read more »

Fast growing Inet opens another store in Stockholm, at the new Barkarby Gate in April. And announces a massive store and service station expansion “We see tremendous potential in the Stockholm… Read more »

The price comparison sites winners 2014 follow each other. Once again Inet scored highest among 15423 reviews when Pricerunner announces 13 category winners in Swedish ecommerce.