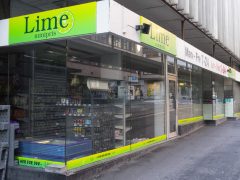 On Friday a new convenience store chain opened in  Oslo. 11 small grocery stores are set to open within 14 days under the label Happy.. Several of them are former… Read more »

58 people are victims of Lime chain scandal around Oslo. Ten of them are believed to be victims of trafficking.

An Iranian woman who came to Norway, fought hard to get a job and sought out many potential employers. She got to talk with Lime, who took advantage of her vulnerability…. Read more »

The shelves are still filled with goods. But the stores are closed and Lime is a non-existent grocery chain today. Last week the youngest brother of the two owners was… Read more »

On Tuesday Matkroken in Bærum was investigated by the police, who took the cash register and computer. The day after, the shop signs were removed and the store closed by ICA.

210 policemen from ten districts in cooperation with customs and tax authorities today hit 20 stores in Norwegian convenience chain Lime Minipris with a coordinated razzia. Police believes several persons from Nepal and India have been… Read more »

Sajjad Hussain, the chief and founder of the retail chain Lime was, according to Dagbladet, arrested by police when he was trying to leave Norway on Saturday. He is accused… Read more »