The retail park Hälla Syd in Västerås has been almost abandoned by retailers. But now a light of hope is coming – as XL Bygg is opening a large store… Read more » 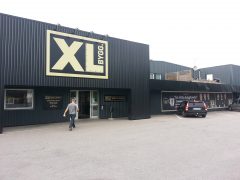 XL Bygg with 140 stores in Sweden is growing. Right now over ten stores are converted to the chain. And the last twelve months the chain reports a double sales… Read more »