Tokmanni Group, the dominant Finnish discount chain is almost finished with the large conversion work and is prepared for a possible IPO.
“All the great job has been done now,” says CFO Sixten Hjorth. 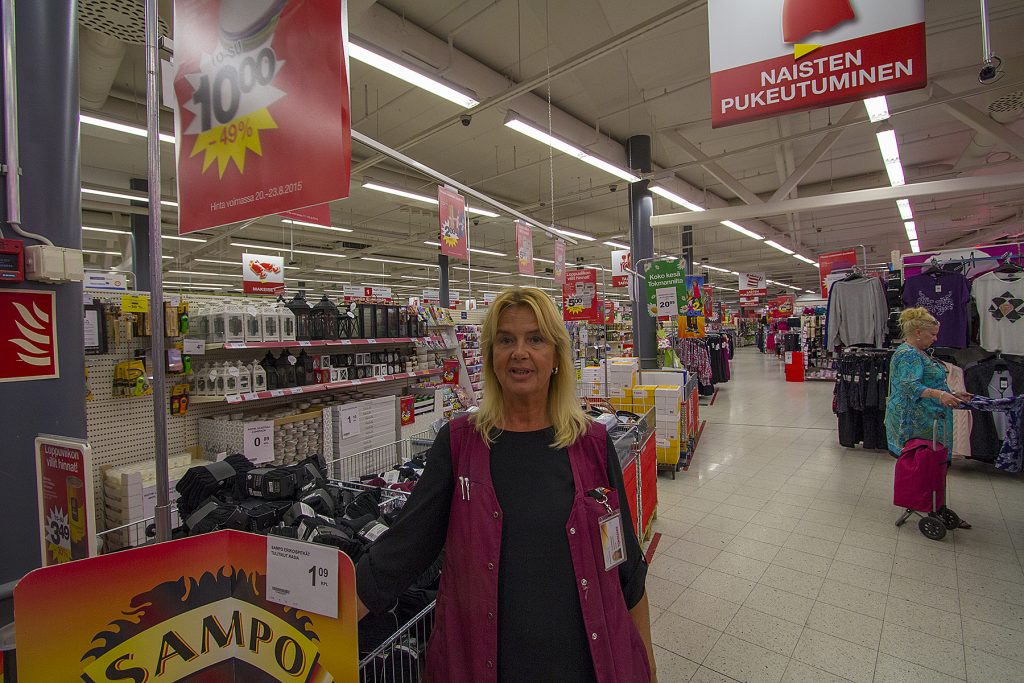 The discount wave is strong in Finland. When retailers have generally tough times and sometimes go backwards in turnover, discounters are gaining land. The department store chain Tokmanni is a clear example of this.

It started with an idea in 2003 of ​​the the private equity company Capman to consolidate and bring together as many discount players as possible under the same roof.

2012, Nordic Capital entered and continued the process work. In practice this means that all brands at the end of this the year will have converted to Tokmanni.

In addition to the head office and logistics center in Mäntsälä, the chain has an Asian joint venture with Norwegian sister company Europris which has lead Tokmanni to increasingly turn directly to importers.

But besides modernizing of stores and a more efficient purchasing routine, the company has worked with the organization internally to make it ready for a potential IPO. Europris, for example, became listed on the Oslo Stock Exchange this year.

“We are instructed to be stock exchange functional and start to come quite far in this. The organization is in good shape, “says CFO Sixten Hjort.

Tina Stenman, store manager of the Tokmanni store in Herttoniemi, shows us around. The whole wide path around the store is split in two by 69 boxes for campaign products, the hottest seasonal goods come right after the entrance. High shelf sections lead to the sides, clothes are presented in the outer lane and household items inside. The first corner gives room for some local initiatives – at our visit, € 1 products. The campaign lane is changed for each, weekly, campaign.

Pet products is a growing category – and towards the end are dry food, washing powder, and finally the coveted hygiene articles. There are a lot of temporary products. Many customers come only for campaign offers.

“We have a lot of women and families who come here. They like to buy cheap diapers and toys, ” says Tina Stenman.

In the future concept, Tokmanni 2.0, that is tested in Loviisa the order of categories in the shop is changed, clothing department comes later and the shop has modernized shelves. Moreover, the range has been somewhat reduced and garden products gained more space.

The Herttoniemi store of 1,600 square meters has an Alko opposite in the Megahertsi-building and a Lidl across the street. The typical customer lives nearby and is on her the way to or from the subway. The shopping center will grow when the S Group will build a Prisma adjacent to Megahertsi. 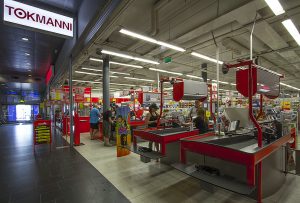 The common customers at Tokmanni are people with a lower purchasing power. But now the chain tries to extend its target group to reach people who have not visited the stores earlier, mainly by television advertising and a wider media mix.

“Before the conversion, many thought the stores looked a little shabby,” says Sixten Hjort.
He says, today it’s bascially only one concept offered, but the Tokmanni stores can be roughly divided into three categories by size. The medium size, about 2,500 square meters, is the most effective and the size all new stores are built in.

Shopping malls and city centers have proportionally smaller shops, around 1000-1200 square meters. The full-range stores, with over 4000 square meters, has more of garden and furniture goods.

But with the conversion of other chains, a small segment of smaller stores with only 300 square meters have been added to the Tokmanni-concept. Sixten Hjort says they raise some concern at the campaigns and are forced to be operated outside of some marketing, but that they also are profitable and strong – mainly established in smaller communities. And they do not affect other Tokmanni establishments in general.

“We are very strong in smaller communities because there is no competition there. In the big cities, where we have more stores, we compete with hypermarkets. ”

Sixten Hjort believes there is a market space for 200 stores, today it is 150 and six new are officially planned.

“We want to cover the whole of Finland with shops.”

There is also a small, but important, e-commerce. It has great growth of around 20 percent, from a small volume.

“It is only ten percent of our products that can be sold profitably online. We will develop it, but the best part is that 50 percent of those buying online also makes use of Click & Collect and thus come into our stores. ”

Expansion of the range online is the next step. It is also a key customer service tool and marketing channel for small stores.

But you do not have online terminals in stores?

“It’s something we thought about and it is possible that this will happen soon.”

Increased turnover and profitability are the main objectives in the short term. Sixten Hjort rejects expansion to
a neighboring country, although the Baltics could be an option.

“We are aiming to make it work even better in Finland.”