The retail park Hälla Syd in Västerås has been almost abandoned by retailers. But now a light of hope is coming – as XL Bygg is opening a large store in the former Willys store. 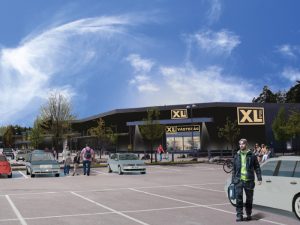 “We are pleased to implement this establishment in Hälla Syd retail park. Västerås has been a white spot for XL Bygg and it is with pleasure that we and the whole chain looks forward to offering Västerås a facility that will attract both professionals and the conscious consumer,” says Patrik Andersson, XL Bygg Västeras.

Patrik Andersson runs Ransta Snickeri, belonging to XL Bygg, north of Västerås and previosly located with a small sales branch at Erikslund on the other side of Västerås.

The venue has previously been leased to a Willys grocery store and will be converted to the building trade with the opening in February 2016. The planned change process will also include a façade change to improve the impression of the whole trade.

Hälla Syd is a part of Hälla retail park – but the vast majority of the stores has moved away to other premises making Hälla Syd almost deserted. The building where XL Bygg will move in has six store entrances but no other tenants today. The building next to it has suffered from the rebuilt former Ikea store and lost Apoteket and Systembolaget that moved in next to a new Willys. Only Plantagen is keeping the parking area alive today.

“With XL Bygg and Plantagen as anchor tenants, we have laid a good foundation for the continued successful development of the property. Newsec is now working actively to fill the remaining vacancies in the property and to find complementary store concepts to strengthen the market place “, says Anders Magnusson, business manager at Newsec.

Hälla is today lacking a buildingware store after K-rauta left the neighbor premises. Woody, Bygma and Optimera have operations a kilometer away.